Hearing aids are now programmed by the audiologist to provide optimal amplification for each listener according to their hearing loss. The hearing aid microphone picks up speech and environmental sounds, which are then converted to an electric signal for amplification and sophisticated processing based on the hearing loss. The signal is then sent to the receiver, which delivers an enhanced sound signal to the ear canal, making speech more audible. They can also be used in conjunction with other devices through the use of Bluetooth and other technologies.

For those whose hearing losses are too severe to benefit from acoustic amplification, a cochlear implant provides access to sound by providing electrical stimulation to the auditory nerve. 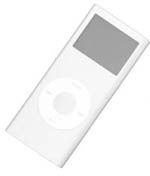 Modern hearing aid devices don’t look that different from the many devices that everyone uses every day.

Technology has given people with hearing loss the same opportunity to use modern devices such as cell phones and iPods through custom ear pieces designed to receive signals from various devices.

The Clarity Phone is an example of an amplified telephone with a speaker, flasher, large numbers, and options for increasing the receiver volume, making it an effective option for many individuals with hearing loss.

A strobe light may be connected to any landline telephone. When the phone rings, it causes the light to start blinking, signaling an individual with hearing loss with a visual signal instead of an auditory signal.

The Shake Awake is an example of a vibrating alarm clock that may be placed under a pillow to wake a sleeping individual with a tactile (feeling) signal instead of an auditory signal.

An FM system uses an FM radio signal to send sounds from a transmitter to a receiver.

The transmitter contains a microphone, which picks up speech and sounds.

The signal is then sent to a receiver, which directs the sound to an individual’s ears, either through headphones or through hearing aids.

It benefits the user by helping to overcome background noise, reverberation, and distance between the listener and the speech/sound. FM systems are commonly used in group events, classrooms, watching television, or one-on-one conversations between speaker and listener.

A microphone transmitter is placed on the conference table; the woman in orange is wearing a receiver around her neck that sends signals to her hearing aid. 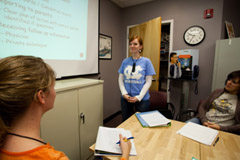 The microphone transmitter is worn by the lecturer, so that even if the speaker moves around, the person with the receiver can hear clearly.

Bluetooth devices use a wireless Bluetooth shortlength radio wave signal to send sounds from a transmitter to a receiver. The transmitter contains a microphone, which picks up speech and sounds. The signal is then sent to a receiver, which directs the sound to an individual’s hearing aids.