The actor Carl McIntyre leads off with a description of his latest project: a 20-minute play about living with aphasia. He has all the compelling facial expressions of an actor, capturing the audience of fellow group members with his engaging presence, and exclaims ”Yes!” when his explanations are understood. He struggles with multisyllabic words, syntax, acronyms, names of buildings, and verbs. But his urge to get his message across propels him to kept trying. He prompts himself by saying ”A-B” quietly, then ”C-D” loudly when trying to describe the discs with music on them. Carl had a stroke in 2005 at the age of 46 that left him with aphasia. He says he knows it will never be the same, but his condition has improved with practice and therapy.

Joe asks Carl ”Will there be jokes in the play?” Carl agrees that a bit of light humor might be a good thing to add. Joe goes on to say that with his family, he often says things inadvertently that come out very funny. He encourages his family to laugh and he doesn’t mind-he seems happy to have made ”stupid jokes.”

Each member gets an opportunity to talk about ”what’s new and exciting in your life?” with a group of people who have gone through the same difficulties in trying to regain their prior capabilities. Of his own progress, Jay says, ”I get better, I talk, speak, read.” He puts his limp hand on the table and says ”Here, nothing.” But Jay tells the group several times during the session how much he wants to walk better, and to continue improving. ”I’m on a mission!” he exclaims. Everyone nods, silently acknowledging the determination necessary to keep making progress toward the elusive goal of being able to communicate and be understood again.

Sharon takes her turn as photos of her travels and pets are displayed on a screen. She speaks well, but has some lapses in trying to remember names. Her husband is supportive, encouraging her to describe their dog, cats, and the raccoon who recently visited their backyard.

It’s Kassi’s turn and Joe asks her what she’s been doing. She picks up a bag and dumps out about 20 smaller bags onto the conference room table. They are filled with beaded bracelets, necklaces, and earrings she has made, using her one unparalyzed hand and mouth to do her craft. When asked about her work she lights up. ”I love it, ”she smiles, ”I do.” She tells of her plans to try to sell her jewelry online. The others in the group encourage her, and there follows a description of how Internet commerce works, what broadband is, online shopping-a topic everyone is interested in, but one that involves some difficult vocabulary. Carl has heard of a website, but can’t say the name; still, he is able to write it down. The group facilitator, speech-language pathologist Denise Caignon, gives small whiteboards and pens to participants who have spared writing skills. Aphasia affects everyone differently; some people can still write, others use hand gestures or even drawing. Many can still use spoken key words to get their point across.

They meet every Monday at 1:00, sometimes only 4 people, sometimes 8, but whatever their numbers, this is a group that supports, listens, encourages, laughs…and is on a mission.

For more information about Aphasia, visit The National Aphasia Association at: http://www.aphasia.org 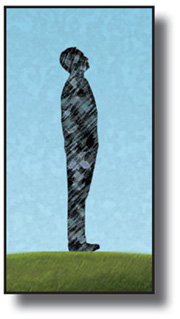 “Aphasia” tells the story of local actor Carl McIntyre who acquired aphasia after a stroke to the left side of his brain. Carl stars as himself in this film, which was written and directed by his friend and colleague, Jim Gloster. The cast includes accomplished actors who were touched by aphasia through their friendship with Carl and who have accompanied him on the long journey of recovery and adjustment.

Premiered: May 1, 2010
at the Division of Speech and Hearing Sciences Anniversary Celebration