*names have been changed

When Julie first noticed that her daughter Amanda was having trouble forming words, she was a little worried. When Julie would say ”b-b-ball” Amanda would try to say the same word, but couldn’t manage it. Then Amanda starting forgetting words that she previously had known. Amanda is an example of a child with apraxia of speech, also known as dyspraxia, who was diagnosed early, given appropriate therapy, and now is in regular classes and at a normal developmental level. It is a tribute to the family that their philosophy all along has been: ”This is another bump in the road that kids go through: we are determined to come out on the other side and be stronger for it.”

Julie says that her advice to other parents is: ”Trust your intuition!” She had taken Amanda for evaluation to her pediatrician for speech delays and they had been shrugged off. She did research and read about such delays and thought that her child might have dyspraxia. Amanda showed many of the signs that she had read about: she learned words and then didn’t remember them; she tried desperately to say words but couldn’t; she was very oral, drooled, and wouldn’t give up a pacifier; she would choke on food more easily than other children her age; she couldn’t control muscles well or maintain her balance.

Julie referred herself to a developmental evaluation clinic and they confirmed that Amanda’s hearing was fine, but that she most likely had dyspraxia, also referred to as childhood apraxia of speech. Children with dyspraxia can also have motor apraxia and have difficulty with muscle movement and balance. Amanda was 18 months of age, but the clinic recommended waiting until she was 24 months to address the issue. But Julie knew from experience and reading that the age of 18-24 months is a huge window of opportunity for child development and she didn’t want to lose that time.

Julie contacted an expert in dyspraxia from the UNC Division of Speech and Hearing Sciences and Amanda began therapy. The therapist typically brought a student in training along to learn how best to provide this type of home-based therapy to a child with dyspraxia and engage the whole family, teaching them how to use books and toys in the home to work with Amanda on her speech. 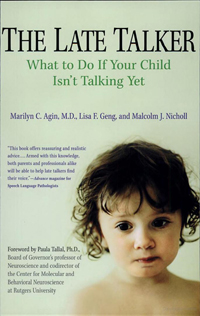 ”Our attitude is that this is another bump in the road that kids go through: we are determined to come out on the other side and be stronger for it.”

-Mother of a child with dyspraxia

In Amanda’s case, sometimes during and typically after each therapy session, all the family members would participate in exercises and games on a daily basis. It became such a normal part of Amanda’s routine that Amanda assumed for a long time that all of her friends also had speech therapists.

Amanda was evaluated by the school system and was eligible for speech therapy and occupational therapy. She attended an early intervention program and constantly improved to the point where, when she entered kindergarten, her teacher said that she couldn’t tell that Amanda had dyspraxia.

Although Amanda was progressing well verbally, sometimes she would fall down or walk awkwardly because she also had disruptions at the conceptual stage of motor planning where purpose and desire to perform specific movements are formulated. Julie found that she needed to educate Amanda’s teachers about the condition: even up to 2nd grade she had to let the teachers know that they couldn’t just leave Amanda alone at lunch, because there was still a possibility of her choking – she needed to be watched.

Julie suggests that families who have received this diagnosis find someone they can call at any time to answer questions. The issues surrounding apraxia are continually challenging, and involve social interaction, school, family, and siblings – many more areas need to be addressed beyond getting speech therapy.

Once Amanda ”found her voice” and could communicate, she was much calmer emotionally and socially, and grew to feel comfortable in her own skin. She is still sensitive – it is part of her temperament – but through early diagnosis, therapy, and the family’s efforts to normalize the whole situation for their child, she is an example of a best-case scenario for recognizing and treating dyspraxia.

The Late Talker: What to Do If Your Child Isn’t Talking Yet By Marilyn Agin, Lisa Geng, and Malcolm Nicholl, St. Martin’s Press, 2004