The ”Hear Kit” shown here was introduced in the 1970’s as a method of infant hearing screening. Bells, rattles, and other sound-making devices were used in pediatrician’s offices and public health clinics to screen for hearing loss. We now know that behavioral hearing screening is unreliable until infants reach a developmental age of approximately six months.

Newborn hearing screening is now conducted using physiologic measures (auditory brainstem responses or otoacoustic emissions). In 2009, over a 130,000 newborn infants were screened in North Carolina prior to hospital discharge. Permanent hearing loss in newborns occurs at a rate of 1-3 per 1000 in the well-baby population. The prevalence is approximately 10 times higher among infants whose birth history required special care in the neonatal intensive care unit. As a result of newborn hearing screening it is now possible to identify hearing loss and fit hearing aids within weeks of birth.

Many young children who have had the benefit of early identification and intervention with hearing aids or a cochlear implant perform at or above age level when they enter school. Audiologists, working in collaboration with ENT surgeons, speech-language pathologists, deaf educators, and early intervention specialists, are making it possible for children born with permanent hearing loss to have the benefit of an early start in their auditory learning and development of spoken language. 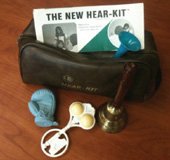 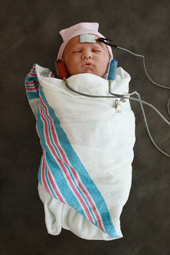 In the 1930s, when this audiometer was in use, the tone at each of the frequencies marked on the dial at the left was first presented to the patient at a level definitely audible to him. He was instructed to keep his finger raised as long as he heard the tone, and to signal when the tone was no longer heard. The intensity of the tone was then gradually reduced by turning the dial at the right until the patient was just able to hear the tone. At this point the hearing loss was read in decibels directly from the dial at the right and recorded on the audiogram.