The fluid-filled inner ear consists of the semi-circular canals, which are essential for balance, and the cochlea, which is the sensory organ for hearing. It is through the cochlea that nerve signals travel from the ear to the brain.

In an ear that functions normally, sound waves traveling down the ear canal cause the eardrum to vibrate, which makes the bones of the ossicular chain vibrate, stimulating the hair cells of the cochlea. The cochlea sends signals to the auditory nerve where they are transmitted first to the brainstem and then to the auditory cortex where they are interpreted as sounds.

What to Do about Hearing Loss

Hearing loss is sometimes described as an invisible condition. In adults it usually develops gradually over time. By age 50 or 60 there can be enough deterioration in hearing sensitivity to interfere with conversation. For many adults there are multiple causes, such as exposure to loud noise, family history, or simply the natural aging process. A complete audiologic assessment is needed to determine the type and degree of impairment and whether hearing aid use is indicated.

Exposure to excessively loud levels of noise can’t always be avoided, but we can do things to prevent damage to our ears. Recent studies have shown an increased incidence of hearing loss among grade school students and musicians. At work and home we can be subject to levels of noise that threaten our hearing. Power tools, factory noises, fireworks, and of course loud music, are all potential sources of noise that can cause irreversible inner ear damage.

At first, the hearing loss may only be temporary, with hearing returning to normal after several hours or days. But, if exposure occurs repeatedly the ears will eventually lose their ability to bounce back, resulting in permanent hearing degeneration.

How do I know if I need hearing protection devices (HPDs)?

If you have to raise your voice to be heard by someone less than three feet away you should be wearing a protective device. One way to reduce hearing damage is by paying attention to noise levels and realizing when they are too high. According to the United States Safety and Health Standards, workers should not be exposed to more than 90 decibels (dB) over a period of eight hours. Most audiologists would like to see that standard modified to 85 dB. If you work in a noisy environment, check out the decibel level you are being exposed to and take the proper precautions. Have your hearing evaluated at least once a year by an audiologist. Turn down the volume, or remove yourself from the noise area when possible. Give your ears a rest for 24 hours after exposure to dangerous levels of noise, and get yourself some hearing protection.

What are the options for HPDs (Hearing Protection Devices)?

Custom earplugs offer the best protection for your hearing. They are made from an imprint of your ear canal, which makes them very comfortable to wear. Over-the-counter earplugs can be purchased at most drugstores and shooting supply stores. They range from foam variety to rubber, silicone, and wax. They’re all affordable, comfortable, disposable, and provide important help in reducing the dangers of exposure to excessive levels of noise. Cotton and tissue are useless. They only reduce sound by less than 7 dB.

Musician’s ear plugs can benefit two types of people. The first is those who are exposed to 90-120 dB sound levels for various time periods and who need to hear accurately, such as musicians, their sound crews, recording engineers, nightclub employees, and other music industry professionals.

A noise dosimeter is a specialized sound level meter which is worn on the body to measure an individual’s accumulated exposure to sound over a period of hours, for example, during a workshift. The Occupational Safety and Health Administration (OSHA) requires that, when workplaces exceed a certain level of noise, employers provide a hearing conservation program, which includes noise monitoring, among other requirements. Noise dosimeters are also occasionally used to monitor recreational noise exposure. 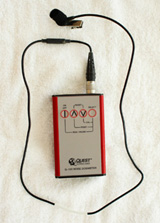