Most people with sensorineural (permanent) hearing loss benefit from amplification. Over the centuries people have developed ingenious ways to amplify sounds. Crude devices fashioned from animal horns were eventually replaced by elaborate ear trumpets like the 19th-century examples shown here.

In the early 20th century the first electric hearing aids provided more amplification than was possible by acoustic means but the devices were large, the batteries were heavy, and the sound quality was poor. Vacuum tubes led to instruments that provided greater amplification and better sound quality but they remained large and bulky.

Wearable devices, although more portable, required an amplifier and battery pack, worn under the clothing, such as the carbon hearing aid worn by the man in the photo above. As smaller vacuum tubes were developed, hearing aids manufacturers attempted to make them ”invisible.” One example here, from the 1950’s, is a tietack-mounted microphone for a male hearing aid user.

When transistors were incorporated into hearing aids in the 1950’s, they improved considerably with regard to size, sound clarity, and battery consumption. But it was not until they became fully digital in the 1990’s that they produced the superior sound quality and flexibility we see in today’s modern instruments. 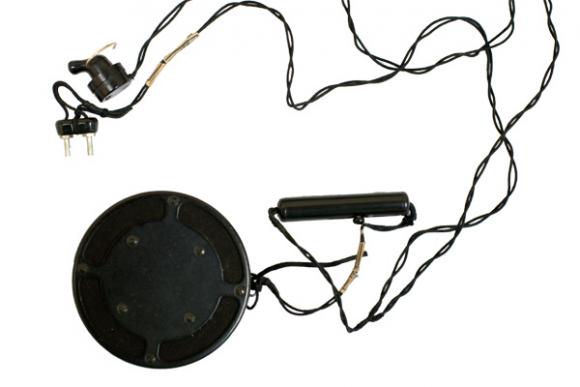 It consisted of a 388W carbon microphone, a 584A miniature receiver, a 60B rheostat, and a battery case, all of which were contained in a velvet-lined box.