Robert Peters talks about the early days of the “Institute” 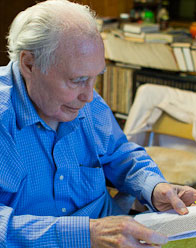 Robert Peters talks about the early days of the “Institute”

The first year was a very busy one in organizing a program of study, space, budget and degree requests to be submitted to the General Administration of the University of North Carolina… Early in the first year we obtained space which is now Wing D of the Medical School. We got some 30 arm chairs that we had to sand out the not so nice carvings of previous students and re-varnish…The academic program was a very formal one that required over sixty hours including a thesis or a research project in lieu of a thesis…The dean of the Graduate School, Lyle Jones, often chided me that we required more than any other department on campus in terms of credit hours. He was also concerned that we went above our allotted number of students, which was forty. In just a couple of years we were up to 55 students.

We made money for salaries in various ways. Hearing conservation classes were one. These were usually two or three-day classes over a weekend that met Occupational Safety and Health Administration (OSHA), regulations with regard to acceptable noise levels for workers and keeping audiograms on employees. Thomas Wood and I taught these classes and applied the money towards salaries.

”In all of these activities, the students were the best part of the program and I enjoyed them all.”

For several years I also taught the intermediate statistics course that all students were required to take even though I protested that I was not a statistician and should not be teaching the course. Two things always amazed me when I taught this course. One was that my notations on the chalk board went half way around the room and the other was that students often said that statistics was their favorite course.

In all of these activities, the students were the best part of the program and I enjoyed them all.

Excerpted from text written by Dr. Peters about the beginning of the Speech and Hearing Sciences program.