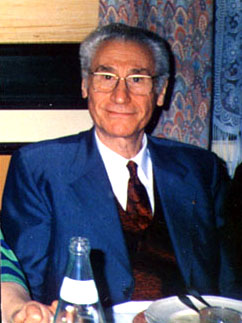 Roland Zissu was born on December 17, 1919 in Paris. He studied at the Lycée Pasteur de Neuilly-sur-Seine and counted Jean-Paul Sartre among his teachers (for philosophy). He wished to teach but his parents insisted that he study medicine.

Zissu pursued the first three years of his medical studies in Paris. He was mobilized on June 8, 1940 and ended up in Bordeaux after the defeat of the French forces. He then studied in Montpellier while playing an active role in the Resistance (1941-1943).

In order to avoid being arrested, he went to Spain, then to Casablanca and Algiers, where he wrote his medical thesis in 1943/1944. He then rejoined the army of free France, first as aspiring doctor and then sous-lieutenant. He participated in the campaign in Italy and the landing at Cavalaire-sur-mer by the Première Division française libre of Général de Lattre de Tassigny, which moved North toward Strasbourg and liberated Lyon. He was taken prisoner and was forced to march on foot to Meiningen, Germany (January-May 1945). When he was freed, he returned to France and discharged with a rank of médecin-capitaine and decorated with the Croix de Guerre.

Zissu decided to study homeopathy under Dr. Emile Iliovicci because his brother was seriously ill. After six months, he joined a joined the leading team of Dr. Léon Vannier at the Centre Homéopathique de France (C.H.F.). Zissu practiced homeopathic medicine for approximately 40 years (1946-1989). He also taught at C.H.F. (1946-1954), then at the Institut National Homéopathique Français (1964-1982). He served as Secrétaire general (1964-1974), then president (1974-1982) of the school and oversaw the creation of a 3 year course.

He was elected Secrétaire Générale and then vice-president of the Syndicat National des Médecins Homéopathes Français (1964-1982), and then honorary president. In 1982, Zissu created the Association pour la formation médicale continue en homéopathie. He was scientific director of the revue “L’Actualité homéopathique” from 1989-1990.

Throughout his career Zissu published articles and books on homeopathic subjects, focusing on the objective study of both classical and homeopathic approaches, in a spirit of openness that also emphasized empirical evidence. He valued the humanity of the patient and believed in an important social role for the doctor in the community.

Zissu retired in 1989 and continued to participate in conferences.