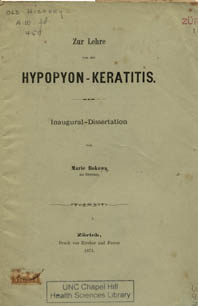 Marie Bokowa (sometimes spelled Bokova) was one of the “Zurich 7”, the first group of women to be admitted and granted degrees at the University of Zurich medical school. She received her degree in 1871. At age 29, she was the oldest of the pioneering women to study in Zurich.

Bokowa was born in Russia and was influenced by Nadezhda Suslova (the first woman to obtain a medical degree in Zurich), whom she met in St. Petersburg. They were influenced by the wave of reforms that resulted from the Russian defeat in the Crimea and the liberation of the serfs. Bokowa and Suslova were active in the “Land and Freedom” movement and attended the St. Petersburg Medical-Surgical Academy until the government banned further study there by women.

Bokowa was interested in ophthalmology and worked with Professor Friedrich Horner to study all of the cases of hypopyon-keratitis treated at the eye clinic in the preceding 10 years. She shared her results in her thesis. Before graduating, Bokowa volunteered to accompany a medical expedition to the Franco-Prussian battlefield near Belfort in 1871. She returned to Russia in the fall after receiving her degree and was allowed to practice medicine. Bokowa continued her studies of ophthalmology in Vienna and joined the Russian Academy of Medicine as a researcher.

She eventually married physiologist Ivan Sechenov (1829-1905). Bokowa was well known to Russian women in the 1860’s. She was interested in nihilism, idealistic about the future, and viewed medicine as a way to help her people.

University of Zurich – About the University. http://www.uzh.ch/en/about/portrait/history.html. Accessed 10 September 2012.