The HSL hosted this event featuring 35 paintings and collages of Wolfgang Ritschel between September and December 2009. 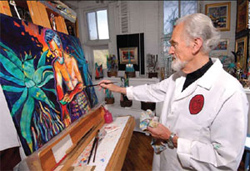 Scientist. Philosopher. Artist! This is not an exaggeration. Wolfgang Ritschel is all of these. Born in Trautenau, in what is now the Czech Republic, and raised in Vienna, Ritschel excelled at both left brain and right brain disciplines from an early age. His formal training in painting, starting at age 14, extended to his undergraduate days at the University of Vienna, where he eventually earned a doctorate in philosophy. Ritschel continued his education earning doctorates in pharmacology and medicine and a master’s degree in pharmacy.

Ritschel taught at universities in Austria, Bangladesh, and Switzerland before arriving at the University of Cincinnati in 1968. At Cincinnati he held a dual appointment as professor of pharmacokinetics and biopharmaceutics in the College of Pharmacy and professor of pharmacology and cell biophysics in the College of Medicine; he is now professor emeritus. In his 29 years in Cincinnati he published 14 books and 370 of his over 440 scientific articles, and secured 22 patents. He was a pioneer in pharmacokinetics, and was honored for his ground-breaking work in the field by numerous academies, including the Fulbright Senior Scholar program and the Royal Academy of Spain. 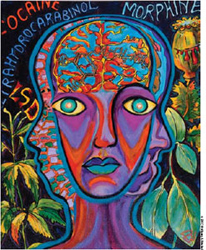 During his years as a scientific scholar and teacher, Ritschel never lost his passion for painting and sculpture. He continued training in these disciplines at the Cincinnati Art Academy, Miami University, and the Anderson Art Ranch in Snowmass, Colorado. He began exhibiting his work in the early 1990s. By 2008 Ritschel had over 60 solo shows in the U.S., Europe, and South America, and had participated in over 290 group shows, including the International Biennale of Contemporary Art 2005 in Florence, Italy. Museums, corporations, and private collectors worldwide have added Ritschel’s works to their collections.

Ritschel describes his painting style as expressionism influenced by fauvism. The subject matter is mostly landscapes or cityscapes of places he has visited. He captures people living in these locations, with their cultural character and social mores. Ritschel’s sculptures deal almost exclusively with medical themes using an unusual medium: leaded stained glass and discarded, mostly stainless steel medical instruments. 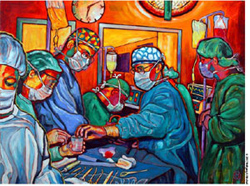 The influence of his many visits to South America is readily apparent, especially in Ritschel’s paintings. “I use extremely brilliant, vibrant, bright fauvistic color schemes as well as strong cloisonnistic encasements and overlapping,” Ritschel says. When teaching clinical pharmacokinetics and doing medical research in South America he traveled through the Andes Mountains and was struck by the different color perception at the high altitude. The profound impact of that experience is evident in all of Ritschel’s paintings, and epitomizes the confluence of his disparate, yet complementary talents.

A copy of the exhibition catalog is available at the HSL:  Learned in science, explored in art : an exhibition of paintings and sculpture by Wolfgang Ritschel