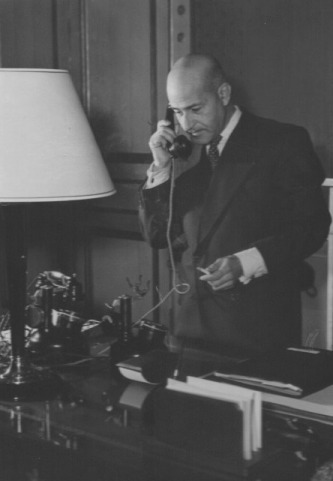 Chérif Sid-Cara was born on November 26, 1902 in Mila (department of Constantine, Algeria). He attended the lycée in Constantine and then studied medicine in Algiers, Bordeaux, and Paris. He did his internship at the hospital in Oran and received his Doctorate in Medicine in 1931. He was certified doctor in the Merchant Marines (Bordeaux) and earned diplomas in colonial medicine (Bordeaux), from the Institut d’Hygiène et d’Epidémiologie (Paris), in Hygiène Scolaire et d’Education Physique (Paris), and in Malariologie (Paris).

Sid-Cara was a friend of the député of Oran (M. Mekki), was elected in the municipal elections of 1935, and became his assistant in the mayor’s office. During World War II, he was doctor of the ports d’Oran and the Mers El Kébir, then chief doctor of the military hospital Marie Feuillet in Oran.

On December 8, 1946, he was elected conseiller de la République (senator) under the party Démocratique d’Union Franco-Musulmane. He was reelected on November 7, 1948 and became a member of the Commission des familles and of the Commission du Travail et de la Sécurité Sociale. Reelected on May 18, 1952, he again became assistant to the mayor in Oran on May 10, 1953. On September 20, 1953, he was elected to the Assemblée Nationale as député of Oran to replace Mekki, who had died.

In 1955, he was elected Conseil Général of the department of Oran and was elected president of the department the next April. In 1957 and 1958, he served as Secretary of State of Algeria in the cabinets of Maurice Bourg-Maunoury and Félix Gaillard. In May 1958, he became co-president of the Comité de Salut Publique de l’Algérie et du Sahara, where he worked for free access of Algerian arabs to France.

During the November 23, 1958 elections, his party, the Union pour le Renouveau de l’Algérie Française, was elected with 84% of the votes. In the Assemblée Nationale, he helped organize a group of representatives from Algeria and the Sahara, which included 66 députés. This became known as “Unité de la République” in July 1959, then the “Regroupement National pour l’Unité de la République in December 1960, which sought to keep Algeria as a part of the French Republic.

In the meantime, Sid-Cara was elected mayor of Misserghin and remained in that post until July 1962. After Algeria obtained its independence in 1962, Sid-Cara resumed his medical studies in Marseille and obtained certificates in Médecine du Travail (1967), Medicine Légale (1969), and the Diplôme relative à la Réparation Juridique de Préjudice Corporel 1970).

Chérif Sid-Cara died on March 6, 1999 in Grenoble and was honored by the Sénat three days later.