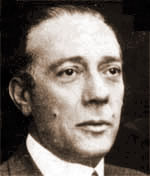 Enrique Finochietto was born on March 13, 1881 in Buenos Aires, Argentina to Tomas and Ana Finochietto, immigrants from Italy. He was raised mostly by his mother, as his father died while he was still young. In high school, he excelled at design, a skill that would help him later in life as an inventor.

He entered the Universidad de Buenos Aires in 1897. During school, he interned at the Hospital Clínicas and became an assistant to the noted surgeon Dr. Alejandro Posadas. He graduated with honors in 1904, presenting his thesis El Pie-Bot Varus-Equino-Congénito. After graduating, he worked in the clinic of skin and venereal diseases at Hospital Rawson, and also worked as a surgical intern. During his internship, he became known for his capabilities and devotion to caring for his patients.

From 1906 to 1909, Finochietto traveled to Europe to study surgical practices. When he returned, he was appointed chief of a surgical division at Hospital Rawson. In this position, he implemented the medical and surgical procedures that he learned in Europe. He lived at the hospital so he could better serve his patients. He spent 1918 to 1919 in Europe working in the Argentinean Hospital for the Wounded during World War I. He received the Legion of Honor and the Red Cross Medal for his service. After the war, he traveled to the United States to observe surgical practices at the Mayo Clinic and other prominent hospitals before returning to Argentina.

When he returned to Buenos Aires, he was nominated the chief of the surgical division at Hospital Rawson, which was being rebuilt. Therefore, he had the opportunity to design his own surgical pavilion. Some innovations he implemented in his surgical department included an outpatient department with separate dressing and examining rooms, separate sterile dressing packages, a narrower stretcher (that could maneuver through the halls more easily), separate departments of orthopedic surgery, endoscopy, and pathology (among others), and laboratories and radiology departments in the hospital itself. He also eliminated the unwieldy book form of medical records that had existed previously, and instead created separate envelopes for patients.

Finochietto not only changed the way surgical pavilions were organized and operated, he also invented many surgical instruments, having sixty-seven inventions to his name in his lifetime. These included an electric surgical table so a patient could be moved to any position, a special orthopedic table, a thoracic rib retractor, the surgical vacuum, and a bench that allowed surgeons to operate while seated. He also changed how surgery was taught and performed in Argentina. Before, surgery students were given little practical experience in surgery during their education, and surgeons were often theatrical and showy during operations, with little regard for tissue damage done to the patient. Finochietto insisted on giving students more practical experience in surgery and maintaining a calm, professional manner throughout a surgical procedure, treating surgery as a carefully developed craft.

Some of Finochietto’s other notable accomplishments include becoming the Clinical Professor of Surgery at the University of Buenos Aires, the president of the Buenos Aires Surgical Society in 1922, and an honorary professor at the University in 1933. He was also the first doctor in Argentina to repair a wound to the heart, saving the life of his patient. He published over fifty papers in his time, and worked on a sixteen-volume surgical guide with his brother Ricardo, which he was unable to finish. In 1940, he performed his last surgery, retiring soon after due to the effects of a long-term illness. He continued writing until his death on February 17, 1948.