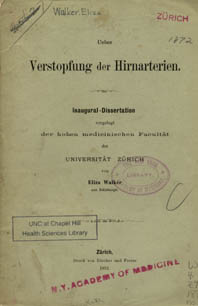 Eliza Walker was one of the “Zurich 7”, the first group of women to be admitted to and receive a medical degree from the University of Zurich.

Originally from Edinburgh, Walker was the youngest of the Zurich 7 women, beginning her medical studies at age 19. During her studies, she became the first woman assistant in the Zurich canton hospital’s women’s ward. She wrote her thesis on the blockage of arteries based on a complete literature review and on 14 cases she observed in Zurich. She passed her final examination with special distinction and received her degree in 1872.

In 1873, Walker was appointed house surgeon at the Hospital for Sick Children in Bristol, resulting in a great deal of controversy. She was officially admitted to practice medicine in Great Britain in 1877, along with her co-student Louisa Atkins.