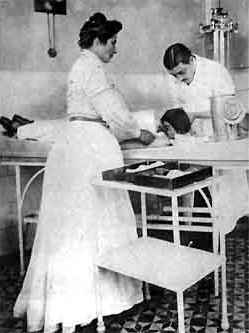 Pedro Chutró was born February 18, 1880 in Chascomús, in the province Buenos Aires. He received his Bachelor’s degree from the Colegio Nacional Central in 1897, and then entered the Medical School at the University of Buenos Aires. He received his doctorate in 1904, completing his thesis Fracturas de la Extremidad Inferior del Húmero en los Niños. During medical school, he worked in the Servicio de Cirugía de Niños at the Hospital de Clínicas and studied under the noted surgeon Dr. Alejandro Posadas.

After completing his education, Chutró traveled to Europe and the United States to study medical practices and observe surgeons. When he returned to Argentina, he was made head of surgery at the Hospital Alvarez, and in 1909, he was appointed as a substitute professor of Operative Medicine. In 1910, Chutró and his contemporary Enrique Finochietto introduced the Ombredanne and Junker ether vaporizers to Argentina. He was also a charter member of the Sociedad de Cirugía de Buenos Aires, which was formed in 1911.

In 1914, Chutró volunteered his services as a surgeon during World War I, and was stationed at the Hospital in the Liceo Buffon in Paris. Soon, he had a hospital with 1,000 beds under his charge, and in the years 1915 and 1917 performed over 1,000 major operations. He also performed the first assay of an anti-gangrene serum during the war. He received the Legion of Honor for his war service, and was made a member of the Academy of Medicine and Surgery in Paris. After the war, he traveled to England, Spain, Chile and the United States to give lectures, and received numerous tributes and distinctions in these countries.

When he returned to Argentina in 1919, Chutró was made a titular professor at the Clinica Quirúrgica and continued to work in hospitals in Buenos Aires. He has over 100 publications to his name. He died of a cardiac lesion on October 19, 1937.