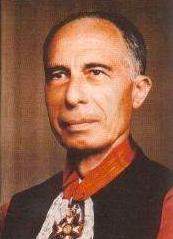 René Bourgeon was born on August 23, 1912 in Saint-Arnaud in the department of Constantine, Algeria. He was named hospital intern at the Hôpitaux d’Alger in 1933 and studied surgery under professors Costantini and René-Marcel de Ribet. In 1937 he was called up by the military and served in Tunisia and then in the service de Santé with the Corps Expéditionnaire during World War II. He wrote his dissertation in 1940, presumably during a brief period of civilian life between deployments. After his final discharge in 1946, he returned to Algiers and resumed his medical career. In 1949 Bourgeon was named to the medical faculty in the department of anatomy and also to the hospital surgical team. A year later, he assumed the directorship of the Hôpital Parnet Hussein-Dey.

In 1951, Bourgeon and his mentor Costantini organized the first Congrès Mondial du Kyste Hydatique. He pioneered new surgical techniques and was one of the first surgeons in the world to do a “hépatectomie réglée”, that is, a partial removal of the liver. Soon after, Bourgeon became the chair of the department anatomy and experimental surgery. He later became professor of clinical surgery. In 1961, he assumed the presidency of the Conseil Départemental de l’Ordre des Médecins.

In 1962, when the Algerian War of Independence made it necessary to leave, René Bourgeon was employed by the Ministère de l’Education Nationale à l’Ecole de Médecine de Poitiers, then at the Faculté de Médecine de Marseille. He also opened a surgical practice in Nice, where his family lived. In the midst of commuting between Nice, Marseille and Paris, Bourgeon developed a plan to build a modern surgical clinic in Nice and formally establish a school of medicine there. In 1967-1968, the Faculté de Médecine de Nice officially opened and René Bourgeon was named its first director.

Approximately 10 years later, Bourgeon retired. In 1995, his son in law died and his wife’s health began to deteriorate. Simone Bourgeon died in November. René Bourgeon followed her a year later, on November 4 1996.