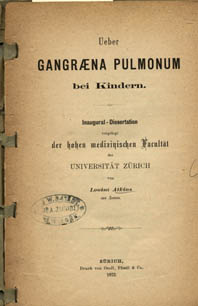 Louisa Atkins was one of the “Zurich 7”, the first group of women to be admitted to the medical school in Zurich and granted degrees.

Originally from London, she was better educated than most English women and realized that she would not be able to get a medical degree in her home country. She matriculated at the University of Zurich in 1867 and received her degree in 1872.

Atkins was appointed to Birmingham and Midlands Hospital for Women in 1872. She was then officially admitted to medical practice in 1877 along with co-student Eliza Walker and appointed as a resident to the Women’s Hospital of Queen’s and General Hospitals.