Spring has finally come to Chapel Hill and the Health Sciences Library is bustling with re-energized students and faculty, exciting events, and the looming rush to the end of the academic year.  We’re thrilled to be at the heart of the action and innovation that’s occurred on the health affairs side of campus.

In this issue of View from the Fifth, we’d like to highlight several upcoming and recent events happening in the Library. This spring marks the 150th anniversary of the end of the Civil War and to honor the strides that wartime medical and healthcare providers have made on behalf of their respective fields, we’ve created the “Medicine in War, 1861-1945,” exhibit, which is on display until April 17. We’ll also welcome Shauna Devine, Ph.D. to the Library on April 8 to give a lecture titled “Doctoring the Civil War: American Physicians and the Transformation of American Medicine.”

Library staff successfully launched the Research Hub @ HSL on March 3 with a Preview Event. This space will help our librarians transform the research enterprise at Carolina for years to come. We’ll have exciting Hub updates in future issues, but for now take a moment to view photos from the event. The launch provided another chance to highlight a recently welcomed the Scientific Art exhibit, which features images captured from the lenses of microscopes that scientists and researchers submitted to a contest hosted by a UNC laboratory.

Friends like you make it possible for our Library to develop and share special collections, honor the history of medicine and be a part of the future of health research. Thank you for helping us continue to be one of the best libraries in the country.

The Health Sciences Library (HSL) is proud to mark the 150th anniversary of the end of the Civil War by hosting an exhibit and corresponding lecture on the transformations in American medicine that were driven by wartime innovations. On April 8, Western University professor and historian Shauna Devine will share unpublished photos and discuss how the war forced many crucial advances in medicine. The exhibit “Medicine in War, 1861-1945,” is on display in the cases near the Columbia Street entrance of the Library until April 17. The related exhibit explores the evolution of military medicine from the Civil War through World War II and features content from several collections from UNC Libraries, Duke University Medical Center Archives, the North Carolina Collection, and more.

Pop culture would have you believe that the American Civil War was a medical disaster—with inexperienced physicians and surgeons hacking off limbs using unsanitized medical equipment and patients biting down on bullets trying to bear the pain. The war was overwhelming in its scope, and physicians were forced to deal with diseases and injuries that differed both quantitatively and qualitatively from what they had known in civilian life. But as the war went on physicians got better—they gained experience dealing with wound trauma and performing difficult surgeries and they studied diseases and developed new management strategies. 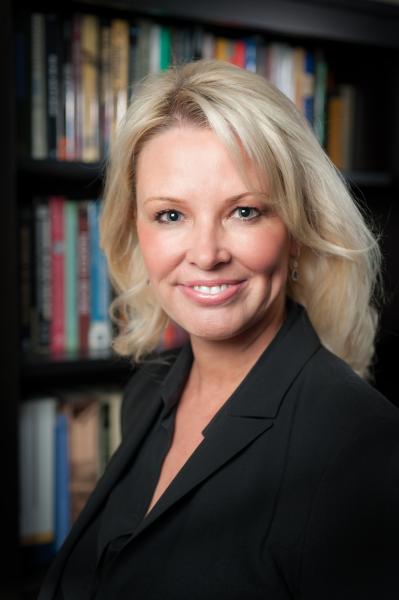 Shauna Devine is a historian of Civil War and American medicine. She received her Ph.D. in medical history from Western University. She has won awards for her work on Civil War medicine including the H.N. Segall Award and the E.M. Wightman Award. She is currently a Research Fellow at the Schulich School of Medicine, and an assistant professor in the department of history at Western University, where she teaches courses in both medical and Civil War history.

Devine has authored many articles on the topic and a book titled, “Learning from the Wounded: The Civil War and the Rise of American Medical Science” (University of North Carolina Press, 2014), which examines the development of scientific medicine during the American Civil War, and the impact of the War’s events on American medicine. She is currently working on a second book length project, which investigates the history of science, medicine, and medical education during the Civil War, and reconstruction in the American south. 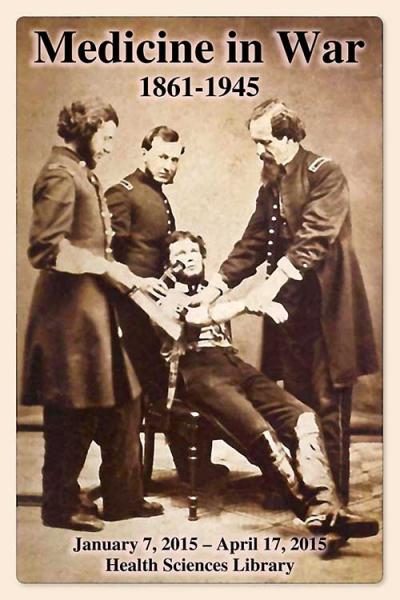 Visitors can interact with the exhibit by listening to three past Bullitt History of Medicine Club lectures: “Of Wards and War: The Importance of Good (and Bad) Medical Care in the American Civil War,” by Dr. Margaret Humphreys; “Mending the Casualties of WWI: The Army Rehabilitates the Wounded,” by W. Sanders Marble; and, “The Sixty-Fifths: Famous Carolina Army Hospitals of WWI and WWII,” by the late Dr. Ivan Brown.

The Research Hub @ HSL made its first campus debut earlier this month with a Preview Event that drew approximately 70 faculty and staff in the health affairs. The celebration brought together Library staff from all three of the Research Hub locations (Davis, Kenan Science and HSL) and several of our campus partners, including the Carolina Health Informatics Program, Howard W. Odum Institute for Research in the Social Sciences, NC TRacS, and REACH NC. The Research Hub is a Library-wide effort to better serve the research enterprise at Carolina with spaces, programs and support at every stage of the research process. 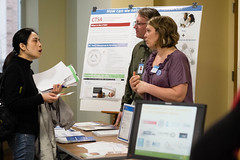 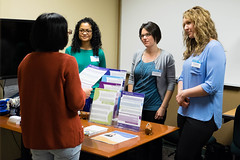 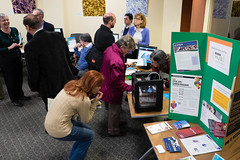 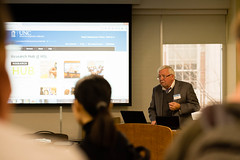 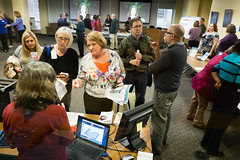 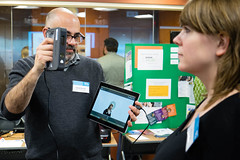 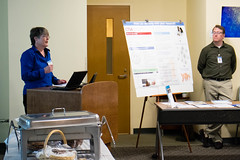 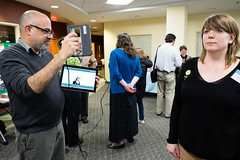 Entire worlds live just beneath the surface of what we can see with the naked eye. Though scientists and researchers see these wonders daily, many of us may never see the beauty they often find under their microscopes.

Thanks to an annual Scientific Art Competition organized by the Chapel Hill Analytical and Nanofabrication Laboratory (CHANL) in the Department of Applied Physical Sciences, the Carolina community can celebrate and enjoy vibrant images and artistic patterns produced in labs from around the world. 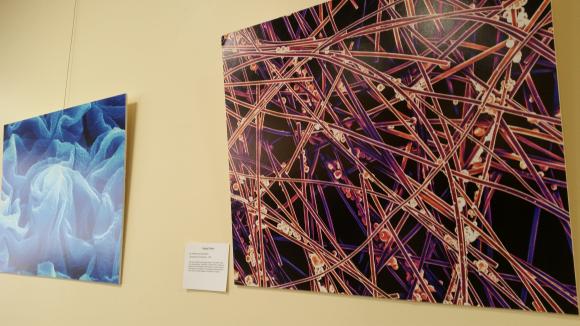 The Health Sciences Library (HSL) is proud to be hosting a selection of entries from the 2014 competition. The images are on display in the open study space on the second floor of the HSL, a space that now a part of the Library’s Research Hub.

“We love being able to display this beautiful intersection of two distinct ways of thinking, artistically and scientifically, in our Research Hub space,” said Barrie Hayes, MSLS, Bioinformatics and Translational Science Librarian and point person for the Research Hub @ HSL initiative. “The goal of the Research Hub is to not only provide services for researchers at every step of their process, but also to bring researchers from different disciplines together to look at problems from a new perspective, just like looking at what’s under your microscope in a different way.”

Carrie Donley, Ph.D., Director of CHANL, launched the art competition with her team of three researchers in 2007-2008. At the time, CHANL had recently moved to its attractive space in Chapman Hall, but the walls were still bare. While assisting lab users, Donley and her staff noticed the incredible images seen with some of the electron microscopes in the lab.

“We thought that this could be a way to display our users’ science visually and present data in a way that the larger scientific community or even general audiences might be more interested in it,” said Donley. “We’re thrilled that the artwork gets to inspire health sciences students and faculty at the Library.”

Donley has seen many different types of submission over the years, including work from a scientific illustrator, images of fish skeletons, nano-flowers, stars moving across a night sky and fractal images made from mathematical functions. The entries have become increasingly more complex, making it a close call for the popular vote by attendees at UNC’s annual Science Expo.

It’s also an opportunity to get researchers to think about problems from outside of their realm of science and consider taking a team-based approach to problem solving, Donley said. 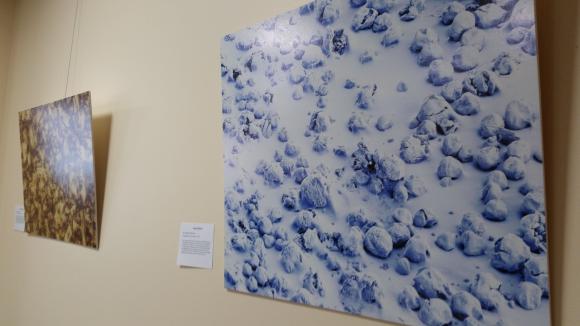 “I think this competition is important for UNC because it makes our scientists think creatively,” Donley said. “I am a chemist; so I am going to approach a problem from a very specific point of view and my perspective on a problem might be very different from a biologist or another scientist. When trying to solve a problem, a team of people who approach the problem from different points of view will naturally come up with more creative solutions, and this is extremely valuable in trying to solve today’s pressing problems.”

One such example of this type of creative thinking came from the 2014 contest winner, David Barrow, Ph.D., who has submitted his artwork inspired by fractal images to the competition for several years. Barrow is the director of the UNC Cytokine & Biomarker Analysis Facility in the School of Dentistry. After years of designing fractal images, Barrow applied his creativity to build a solution for more efficiently storing biological specimen samples in specialized freezers. 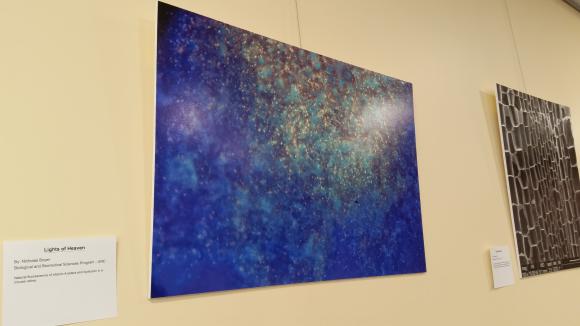 “Through experimentation in fractal software programs such as Apophysis, Mandelbulb 3D, Ultra Fractal and Fractal Science Kit, I’ve been able to create and explore art.” Barrow said. “It makes you think of things in a different way and introduces you to new people and new ideas.”

Barrow has used his artwork to raise awareness of the work of his core facility. He hopes that the artwork he’s created will someday help draw more children and young adults to science and math by allowing them to explore the subjects creatively.

A special thanks goes to the HSL’s Art Committee, specifically Karen Crowell and Bob Ladd.