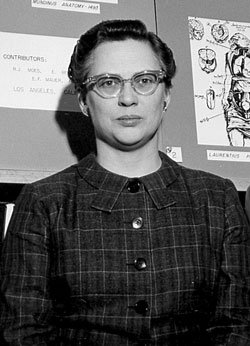 In 1952, after an extensive search, Ms. Myrl Ebert was recruited as the librarian for the Division of Health Affairs Library. Prior to coming to UNC, Myrl Ebert served as assistant reference librarian and periodicals librarian at the New York Academy of Medicine from 1946 to 1951 and as library associate of New York University Bellevue Medical Center Library from 1951 to 1952. She earned a bachelor’s degree in physical education in 1943, followed by a second one in 1945 in library science, both from George Peabody College in Nashville. She received a master’s degree in library science from Columbia University in 1951. 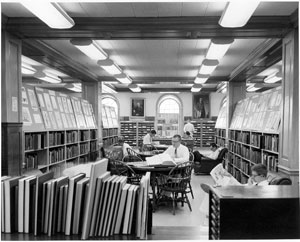 When Ms Ebert arrived at Chapel Hill, the library had moved to the Clinic Wing of Memorial Hospital.

Ms. Ebert made many changes in the library’s organization that are still evident today. The entire collection was reclassified using the National Library of Medicine Schedule. Journals were no longer given call numbers but shelved by title. The Library began collecting historical materials and sponsored the History of Medicine Group (now known as the Bullitt History of Medicine Club). Cooperative acquisitions and loans were initiated with other medical libraries in North Carolina. At Ms. Ebert’s insistence the library became an independent unit within the Department of Health Affairs instead of a branch of the University Library, and remained so until 2011. In 1968, the Division of Health Affairs Library was renamed the Health Sciences Library.

In 1966, she spent time in Saigon, South Vietnam helping to set up a medical library at the University of Saigon Medical School. Ebert recalled, “We watched the shelling every night and then listened to the patients coming in by helicopter.” For her efforts to develop library resources at the University of Saigon, she was awarded the American Medical Association service award. Along with traveling to Saigon, she also hosted many Vietnamese medical librarians at North Carolina.

In 1970, after many years of planning, the Health Sciences Library moved into a new building in the courtyard of MacNider Hall. All medical, dental, nursing, and public health materials could now be brought together in one facility. Previously, these holdings were housed in each of the respective schools. Mary Horres, Ebert’s former student and staff member noted, “Myrl was just the right person to establish and build the Health Sciences Library. She campaigned tirelessly to garner resources for the library and, as a result, she enriched and expanded the collection with many valuable contributed works that the budget could never have afforded.”

Highlights of the 1970 renovation:

In the 1970’s HSL librarians began providing MEDLINE searches, a liaison librarian was hired for the new Area Health Education Centers (AHEC) program, and the Library took part in the development of the Area IV Regional Medical Library program.

Ms. Ebert retired in 1975 after guiding the Health Sciences Library for nearly a quarter of a century. She passed away on May 5, 2001, at the age of 87.

<< Return to the History of the HSL
Sam Hitt >>