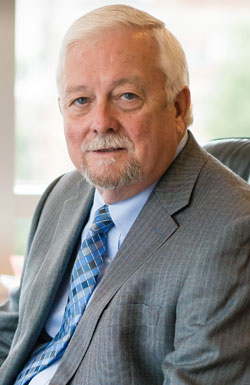 Mr. Jim Curtis became Interim Director of the HSL on July 1, 2013. Curtis received a Masters of Library Sciences at the University of North Carolina at Chapel Hill in 1980. Mr. Curtis has a total of 33 years of experience in librarianship, including 19 years working in three different administrative positions at the HSL beginning in 1990. He left UNC in 2004 to serve as Director of the Savitt Medical Library at the University of Nevada’s School of Medicine in Reno, NV, where he also was a Professor in the School of Medicine and head of the school’s Information Technology Services. He returned to UNC in 2008 to serve as Deputy Director of the HSL.

Jim Curtis comments on his role as Director and the challenges facing the HSL. 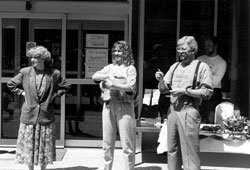 Celebrating the launch of UNCLE

In the 1990s, the HSL and the Office of Information Systems in the School of Medicine formed a task force to implement a MEDLINE search system that users could access from their offices and homes. Mr. Curtis was hired to help spearhead this venture. The UNCLE (University of North Carolina Literature Exchange) system initially provided access to five years of the complete MEDLINE files, including all languages and abstracts. In 1996, UNCLE moved to the web and expanded to include several databases, Internet resources, and computer. UNCLE was phased out in late 1997.

When the HSL began its renovation in 2002, Mr. Curtis was tasked as the HSL Renovation Project Manager. He oversaw activities supporting renovation preparedness, including internal, operational preparedness and coordination with external offices and individuals.

Curtis assumed the role of Interim Director in July 2013 replacing Carol Jenkins who retired after 26 years as Director. Throughout his time as a leader in the Library, Curtis built a legacy of service and innovation, furthering the Library’s involvement with the Carolina Health Informatics Program and Health Affairs Collaborative, supporting the establishment of the HSL’s Research Hub, and being heavily involved in the Library’s operations and planning for the future use of spaces in the building. As Interim Director, Curtis furthered the Library’s transition into being part of the University Libraries system and the development of the first joint strategic plan.

After 21 years at the Health Sciences Library, Jim Curtis retired from his position as Interim Director on August 1, 2015. University Librarian Sarah Michalak said of Curtis.

Jim skillfully steered the HSL during a time of transition. I am grateful to him for the steady voice and deep institutional knowledge that he brought to the direction of the Health Sciences Library