History of the Health Sciences Library 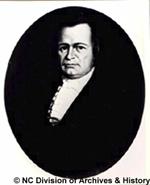 The Health Sciences Library may have its roots in the donation of the first medical books to the University of North Carolina in 1801. Three books, still in the library’s collection, were given by Major General Calvin Jones, an early North Carolina physician.

Dr. Jones was a champion of medical education and active in social causes. He was the first in North Carolina to vaccinate for smallpox and was a charter member of the North Carolina Medical Society.

Who were the first students to use the library for medical study? Perhaps students studying medicine and pharmacy under Dr. Thomas W. Harris between 1879 and 1885. Dr. Harris’ medical instruction was approved by the American Medical Association and sponsored by, although not officially affiliated with, the University of North Carolina.

In 1890, a medical curriculum was established under Dr. Richard Henry Whitehead. Although the program was not formally a part of the University, students on campus may have used the library in Smith Hall. To insure privacy and to avoid strong odors, anatomy sessions were sometimes held in the woods near the University. 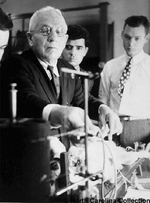 In 1905, a two-year Medical School was established under Dean Isaac Manning. The School was a formal part of the University and a member of the Association of American Medical Colleges.

The new Medical School was housed in Person Hall where the Medical Library Room was reserved for medical journals and study. Medical books remained in the library in Smith Hall.

The Medical School moved to Caldwell Hall in 1912. A large room in the back of the lecture hall was designated for the Medical Library Room. Dean Isaac Manning and the University Librarian Louis Round Wilson collaborated to move the medical collection of around 2800 volumes into the new facility.

The 1920 Medical School Annual Report notes that: “The Medical Room Library was looked after by Dean Manning’s secretary.” This is the first mention of custodial care for the Medical library. We do not know the identity of this first secretary-librarian. 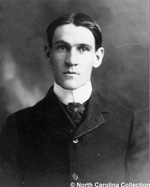 In 1897, the School of Pharmacy was established at the University of North Carolina under Dean Edward Howell. The Pharmacy School was housed in New West until 1912, when it moved to Person Hall. There are no records of pharmacy materials in the University Library, and the School maintained its own library for students and faculty.

The early collection was comprised of donations since the Pharmacy School library budget in 1897 was $3.00, all of which was spent on a subscription to one monthly journal.

In 1926, the Pharmacy School moved into Howell Hall.

The Pharmacy School Library was under the care of Ms. Alice Noble who served as Librarian until 1957. In 1953, the Pharmacy Library became a separate unit of the Division of Health Affairs Library.

In 1959, the Pharmacy School moved into a new building, later named Beard Hall for John Grover Beard, Dean of Pharmacy from 1930-1946. The new building included generous space for the Pharmacy Library.

Public Health studies began with Sanitary Engineering courses taught by Dr. Thorndike Saville in 1921 and with courses in Public Health Administration taught through the Graduate School by Dr. W.C. Jackson.

In 1936, Public Health became an official Division of the Medical School under Dr. Milton J. Rosenau, and public health materials were added to the Medical library.

In 1936, the University Library listed the Medical Library as a departmental library. In order to continue to qualify as a departmental branch, the Medical Library was required to make changes: a separate outside entrance was added and an official custodian was hired for the library. This first official library custodian was John Calvin Grier, a first-year medical student [circled in photograph]. Mr. Grier organized the library, cataloged the collection, and staffed the library many hours each week while attending classes full time.

Dr. Grier remembers his days as a medical student when he worked at the library. 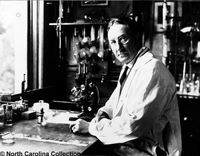 In 1938, Dr. William deBerniere MacNider, Dean of the Medical School, and Dr. George requested funds from the University Library for “a properly trained librarian and an assistant librarian.”

In 1939, Ms. Agnes Dolvin, a graduate of Columbia University School of Library Science, was hired as the first professional librarian for the Medical Library. She began her work in the new Medical Building (now MacNider Hall) in a new library, then staffed by one librarian and four students.

The medical collection included “numerous” journals and 1,024 books. The collection at that time and for many years afterward was funded substantially through gifts from the family of Charles E. Kistler, a UNC graduate. On October 15, 1937, the Board of Trustees approved a resolution naming the Charles E. Kistler Memorial Library of the Medical Sciences in the Medical School of the University of North Carolina. The library was known as the Charles E. Kistler Memorial Library until the late 1940s when it was renamed the Division of Health Affairs Library.

When Ms. Dolvin left the university to become a Special Services Librarian during World War II, the Library was run by Mrs. Gerald McCarthy and Ms. Annie Pickard. During these years the Library was still considered a departmental library under the University Librarian, Mr. Charles E. Rush, and the librarians were considered members of his staff.

The new School of Nursing under Dean Elizabeth Kemble admitted its first students in 1951. This was the first state-supported nursing school in North Carolina. The undergraduate program was accredited by the National League for Nursing in 1955 and the graduate program in 1961. 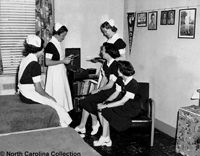 The Nursing School moved into a new nursing building (Carrington Hall) in 1970. 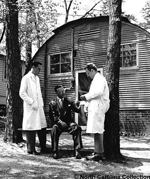 The School of Dentistry under Dean John C. Brauer admitted its first students in 1950. The School’s offices were located in MacNider and Miller Halls, but students temporarily attended classes in Quonset huts.

A permanent Dental School building opened in 1952, and students began seeing dental patients that fall. Funds for library materials had not been included in the North Carolina Legislature’s appropriation for the Dental School, so in 1949, Dr. J. Martin Fleming was named chairman of the Dental Library Committee to collect funds and donations for the library.