For All the People: A Century of Citizen Action in Health Care Reform

The University Libraries at UNC, Chapel Hill is pleased to present For All The People: A Century of Citizen Action in Health Care Reform by The National Library of Medicine. This traveling exhibit will be on display at the Health Sciences Library, second floor, July 29th through September 6th. For building hours, please see Library Hours.

Health care reform has been a contentious political issue in the United States for more than a hundred years. From the beginning of the 20th century to today, citizens have made their voices heard in these debates. For All the People tells the lesser-known story of how movements of ordinary people helped shape the changing American health care system.

The six-banner exhibition highlights images from over one hundred years of citizen action for health care reform.

For questions about this exhibit, please contact Lee Richardson at (919) 966-0941 or richarlm@email.unc.edu.

This exhibition was produced by the National Library of Medicine, National Institutes of Health. 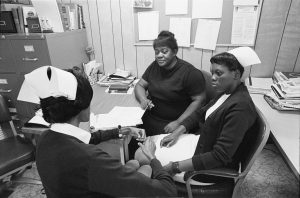 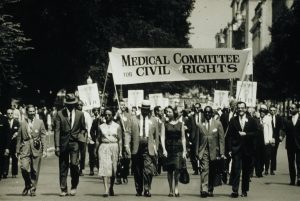 Medical Committee for Civil Rights participates in the March on Washington for Jobs and Freedom, 1963