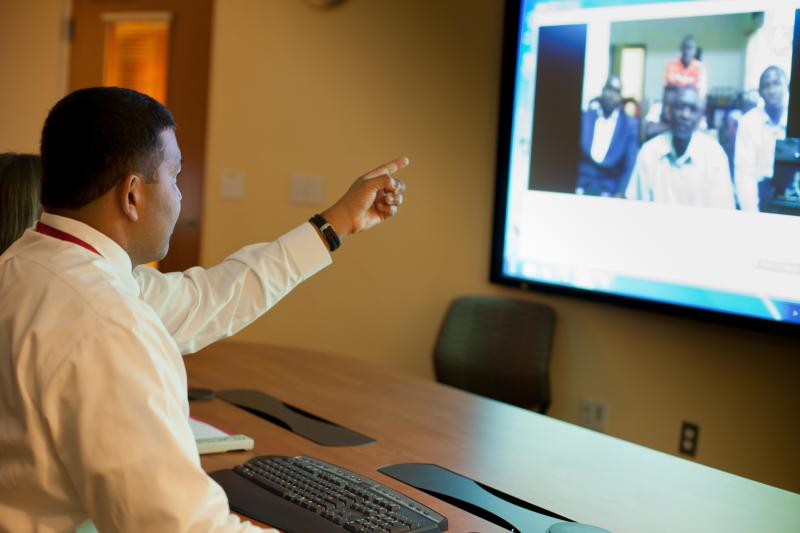 Concerned with the conclusion reported in this study, Dr. Benny Joyner, Assistant Professor of Anesthesiology and Pediatrics in UNC School of Medicine’s Division of Pediatric Critical Care Medicine, and his UNC-Project Uganda colleagues authored a response that challenged the article’s findings. “If what they were saying was right, it flies in the face of everything I’ve been doing for nearly ten years in Emergency Pediatrics,” says Dr. Joyner.

After the response was published by NEJM, Dr. Joyner was invited to a Médecins Sans Frontières (Doctors without Borders – MSF) expert meeting to help shape worldwide recommendations the organization would make on the fluid management of children.

With only two weeks to prepare for the meeting in Belgium, Dr. Joyner turned to librarians at the HSL. Mellanye Lackey, an HSL Liaison Librarian who had assisted and collaborated with Dr. Joyner on previous projects, and Sara Suiter, a graduate research assistant from the School of Information and Library Science, set to work developing a targeted, comprehensive search strategy. After running the search in PubMed and Embase, two extensive biomedical databases, Sara and Mellanye spent hours culling through and organizing the search results, a task Dr. Joyner says would have taken him days, maybe weeks, and would likely not include some important articles.

Dr. Joyner admits he would never have been able to format all the information in such a user-friendly way. Sara and Mellanye placed PDF’s of all the articles in his Dropbox where he could read them at any time, including on his iPad as he flew across the Atlantic without Internet access. “It was awesome! It gave me the ability to efficiently assimilate the latest, current literature in fluid resuscitation in pediatrics in the short and pressured timeframe I had. I already had the ability to speak as a result of what I had learned experientially, but that wasn’t enough for the meeting,” said Joyner.

As the expert meeting unfolded, Dr. Joyner was able to refer the other world health experts to specific articles as they were discussed and/or questioned. “Having reviewed all the articles and having them at my fingertips at all times was invaluable,” said Dr. Joyner. “Just my experience wasn’t enough to compel a change. However, in my opinion, having the body of evidence to support what I practice clinically allowed me to make a recommendation based not only in experience, but also a solid evidence base. And I would not have been standing on such a solid base during the meeting without Mellanye, Sara, and the HSL.”