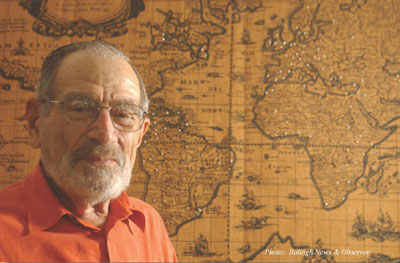 “Dan Okun transformed [this department] from a traditional program in sanitary engineering to the multidisciplinary department we are today.”

Professor Daniel A. Okun was hailed worldwide for his groundbreaking work in water management and supply, pollution control, water reclamation and reuse, and watershed protection issues.

During his career, Okun worked in 89 countries and consulted with municipal and legislative planning committees throughout the United States. His many contributions included designing a water treatment plant in Bangkok, Thailand; establishing a graduate program in sanitary engineering in Lima, Peru; and studying water supply and pollution control in China. At home in Chapel Hill, he led the campaign to build Cane Creek Dam and Reservoir in the 1980s to ensure the most pristine water source possible for Chapel Hill and the UNC campus. 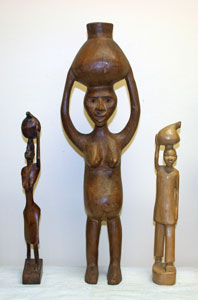 Okun was born in New York City in 1917 and began his collegiate education with a full scholarship to the Cooper Union Institute in New York City, earning a bachelor’s degree in 1937 as a Civil Engineer. The next year he earned a Master’s degree at the California Institute of Technology in Pasadena. His first employment was as a Sanitary Engineering Officer in the U.S. Public Health Service, working on the Ohio River Pollution Survey based in Cincinnati before joining the Army for four years, mostly overseas. After discharge as a Major in 1946, he enrolled in Harvard to work with Professor Gordon M. Fair, earning a Doctorate in Sanitary Engineering in 1948. His work, inspired by Malcolm Pirnie, led to the use of pure oxygen in wastewater treatment and the Eddy Medal from what is now the Water Environment Federation.

Okun began his career at UNC in 1952 and served as chair of the Department of Environmental Sciences and Engineering from 1955 to 1973. During his time as chair, the department grew from three to 25 faculty members. His research interests included the development of dual water systems for the purpose of conserving scarce resources of high quality water by reclaiming wastewaters and other poor quality waters for myriad non-potable purposes such as irrigation, toilet flushing, cooling towers, and industry. Although he retired from teaching in 1982, he remained actively involved in the profession through writing, lecturing and consulting, until his death, on Dec. 7, 2007, at the age of 90.

Thanks to a generous donation by Dr. Okun, the Daniel Okun Papers are now archived in Wilson Library and available to researchers.