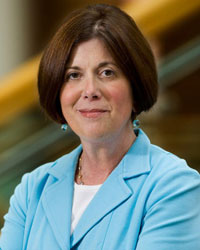 Rimer served in several academic and government positions before coming to the School. Most recently, she was professor of community and family medicine at the Duke University School of Medicine and then director of the Division of Cancer Control and Population Sciences of the National Cancer Institute. She is the first woman and first behavioral scientist to serve as the School’s dean. 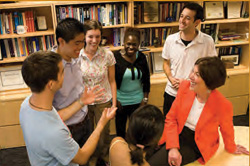 Since becoming dean, Rimer has focused on several priorities, including improved communications; Carolina Public Health, a biannual magazine, was launched in 2005. Rimer has collaborated with faculty leaders to develop strategic initiatives to address obesity, global health, health disparities and water. A primary initiative is to create a supportive and diverse environment at the School. To that end, one of Rimer’s first acts as dean was to create the position of special assistant to the dean for diversity. She has emphasized the translation of research into policies, programs and practices that improve health.

Under Rimer’s leadership, the School received a $50 million gift from Dennis and Joan Gillings. A major product of the gift is creation of Gillings Innovation Laboratories to solve big public health problems in North Carolina and around the world.

“Public health focuses on people – people within populations. Thus, our impact can be huge, because our knowledge and interventions can shift whole populations toward improved health. The research being conducted in our School – and its application in communities – can truly change the world.”

Dean Rimer is co-editor and contributor for the book Health Behavior and Health Education: Theory, Research, and Practice, now in its fourth edition, and also maintains the blog, Monday Morning.